In 1995, legendary American professional wrestler, Ric Flair, performed in front of 190,000 people inside May Day Stadium in Pyongyang. Flair headlined a cross-promotional pay-per-view card, a collaboration between New Japan Pro Wrestling (known as New Japan) and American company, World Championship Wrestling (WCW). At Collision in Korea, Flair faced off against the founder of New Japan, Antonio Inoki, in an event branded “wrestling diplomacy”. The whole event caught my attention and threw up a variety of questions; some have been answered, some have not, and some may not be for some time. Part one of this blog will tackle three of those questions: How did a Japanese and American promotion come to put on a show in North Korea? How successful was “wrestling diplomacy”? What were the opinions of the respective Japanese and US governments?

Inoki managed to survive the figure four leglock before hitting Flair with an Enziguri kick to secure victory.

New Japan’s involvement is relatively easy to trace. Inoki was trained and mentored by North Korean born,  Japanese, pro-wrestler Rikidozan. His bouts in the late 1950s and early 1960s broke records on Japanese TV, but despite continuous requests to return, the wrestler never demonstrated any support for the North Korean regime.  he died of peritonitis in 1963, when a feud with the Japanese mafia resulted in his stabbing at a Tokyo nightclub. The North Korean regime forcibly reclaimed his legacy through the publication of a 1989 biography imaginatively titled I am a Korean: the text became required reading for a generation of North Koreans. Inoki is therfore perceived as a living embodiment of Rikidozan’s legacy. Unlike his mentor, however, Inoki has been much more forthcoming in fashioning links with the secretive regime. In all, he has made 30 trips to North Korea- a recent example of which had him banned from the Japanese Parliament (to which he has been elected three times) for a month in November 2013. Since 1995, Inoki has continued in his attempts to foster Japanese-Korean relations through “wrestling diplomacy” and other means; but for a man with an obviously large ego, the attention and adulation he receives in Pyongyang is an obvious attraction.

Aside from the financial incentive, the motive and desire for WCW to put on a North Korean show seem less clear. Flair himself is well-known to hold conservative political views. Before the trip, he consulted far-right republican senators Strom Thurmond and Jesse Helms, both of whom advised him not to go. For the answer, one may have to turn to the owner of WCW, media magnate Ted Turner. In 2005, Turner publicly declared his sympathy for North Korea in an interview on CNN, and visited the country in an effort to create a nature reserve within the de-militarised zone between North and South Korea. It would seem that the combination of a desire to make money and a sympathetic view of the North Koreans, would make the idea of Collision in Korea appeal to Turner.

The term “wrestling diplomacy” is attached to the event, both by Inoki and the American commentary team throughout the broadcast. A member of said team, Kenzuke Ishikawa, repeats Inoki’s claim that the event was akin to “Ping Pong diplomacy” in 1971. There are two major differences, however, between the two events. Firstly, the inviting of the American table tennis team to play on Chinese soil for the first time was part of a much wider diplomatic effort on the part of both countries to improve the relationship between the two. Secondly, the table-tennis match was a wholly symbolic gesture, aimed at providing a human link between the two nations. Collision in Korea was a multi-million dollar pay-per-view extravaganza that served only as propaganda for the North Korean regime. The broadcast itself is intercut with eerie scenes of a show put on in an empty stadium, with the aim to “show-off North Korean culture”. 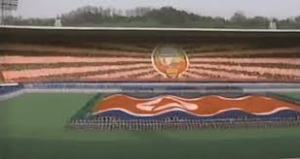 The strange show inside May Day Stadium.

In fact, unlike in 1971, there seems to have been no actual diplomacy going on at all. Rather, Collision in Korea seems simply an attempt by the North Korean regime, to legitimise itself with the staging of a globally televised event. The involvement of Inoki and Turner in the promotion of the communist regime would have been sure to turn heads at the State Department and within the Japanese Government. Neither country has official diplomatic contact with the regime. Interestingly, the US, nor Japan made any public statement either condemning the event or otherwise. This will have been a conscious decision on the part of the two governments, and it will an interesting line of research once the government archives for this period become available. Part two of the blog will tackle further questions; who was attending and how could they afford it? What was the experience of the wrestlers involved? Why are Flair and Ali not held up as traitors?